Our class is aimed at both students and teachers, young and old. Lessons begin with application. We will build a circuit and program the chip and then go back and look at what is happening. In order to give you the ability create your own projects these lessons will give you an understanding of what is going on behind the scenes.
Arduinos and other parts you will need are available in the webshop. 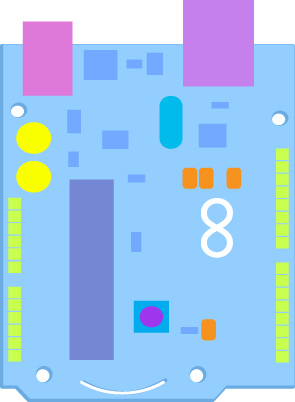 We begin with getting our programming environment set up and taking a look at how it all works. For this section we will need the following:

First lets quickly go over the basics. It all starts with electricity. Electricity is the flow of electrons through a conductor like metal. We can use electrical components to make a circuit that does things like lights up. One such component is the transistor. The transistor is a gate for electricity. We can set the gates to be opened or closed. Using lots and lots of these gates we can make complex interactions.

At the heart of the Arduino is a microcontroller. A microcontroller is a type of integrated circuit (IC). Which means it is an electronic circuit that has been shrunk down and covered in plastic. It is filled with transistors and when we program the Arduino we are setting the gates inside to be opened or closed. When we run the program through the chip we are running electricity through the gates to perform complex calculations. How can a bunch of gates perform complex calculations? Watch this video from Evil Mad Scientist Laboratories to get an idea.

END_OF_DOCUMENT_TOKEN_TO_BE_REPLACED

Lets setup our programming environment. Our microcontroller thinks in binary. Binary means two. It thinks with transistors which are either open or closed, one or two. That may not seem like much but we use only 10 numerals (0-9) and can count pretty high. You do not need to know about binary right now because the Arduino application on our computer will translate into binary for us. 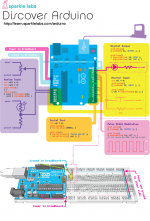 Once you have your Arduino and computer working together lets take a look at the Arduino programming environment:

In the next section we will complete the environment by connecting the Arduino to a breadboard. 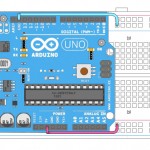 This will run power and ground up and down both sides of the breadboard. 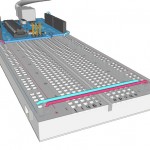 Connect the two sides of the breadboard together. 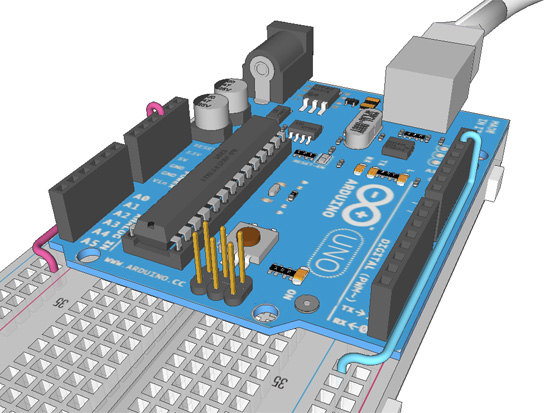 Finally you need to connect power and ground to both sides of the breadboard.

Now that power and ground are running up and down the breadboard it will be easier for us to set up circuits like the LED driver we create in the next section.

When we connected our Arduino with the computer we tested the connection by blinking an LED on the Arduino. In this section we will build an external LED circuit for the Arduino to blink. We do not want power running as we build the circuit.

This example code is in the public domain.
*/

Here is the example Arduino blink code. We call the programs we write for Arduino “sketches.” The Arduino program comes with many basic example sketches available in the file menu. Lets take a look at what is happening in this sketch.

The text in grey are called comments. It is a good idea to comment your code as you write it. This is just to make the code easier for people to read. All text that appears in between /* and */ or after // becomes a comment. The computer strips out the comments when uploading the program to the Arduino.

Here is the same code without the comments:

The first statement is pinMode. When the Arduino reads this statement it changes what job a pin has. In this case we are telling pin 13 to be an OUTPUT pin. An output pin effects the flow electricity. It is like a switch that can be connected to power or ground whenever the Arduino says.

Next we have digitalWrite. This tells the Arduino to connect an output pin to either power or ground. As with the previous statement, we need to give some information when we send the command. In this case, pin 13 and HIGH. HIGH means power and LOW means ground. When we created our circuit on the breadboard we connected Pin 13 to ground through our LED circuit. When we tell the Arduino to make pin 13 HIGH, power can flow to ground through the LED circuit. When pin 13 is LOW both ends of the LED circuit are connected to ground so electricity does not flow.
END_OF_DOCUMENT_TOKEN_TO_BE_REPLACED

In order to really learn you must use your knowledge. In this section you will complete assignments that use what you have learned in section 1.

Change the speed of the blink or introduce a pattern of blinking.
You can change the amount of time of the delay commands to keep the LED on or off as you like. You can also introduce more and more delay and digitalwrite commands.

Add a second LED circuit on pin 12.
This is just repeating what you did before but now you will have to code to blink both leds.

Make a pattern where the second LED blinks multiple times every time the first LED blinks.

This circuits reads a binary number from a DIP switch and translates it in the Arduino’s serial port monitor.