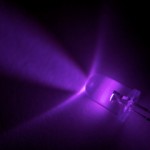 If you are like me, you probably have a bag of assorted LEDS in a dark corner of your toolbox or in your Discover Electronics kit. You want to use one of those LEDs for your next big electronics project but you’re not sure what voltage is required. Why can’t all LEDS require the same voltage?