Thank you to all of our supporters and friends at The Next HOPE Conference! Sparkle Labs operated a vendor-table at “Hackers on Planet Earth”, which is hosted by 2600: The Hacker Quarterly.  Conference lectures were given by major influencers in the community, and held on the 18th floor. They were later projected onto the walls, with interesting “hacked-spam” streaming across the wall, which added a light sense of humor to the bustling room.

We sat by our friends from Make: Magazine, and took turns attending the lectures.  The Hackerspace Village opposite us was constantly filled with people “populating” their RFID badges, to track their movement throughout the conference.  Many attendees continued to work in the Hackerspace all night, aided by Club Mate, the popular and powerful beverage for sale.

The “intro to lock-picking”, by TOOOL, was a fun break to our day. Constantly changing throughout the day, classes were based on skill levels of lock-picking and various lock types. The Mid-Atlantic Retro Computing Hobbyists were also fascinating, with retro-computers that proved the true origins of “smart phones”. 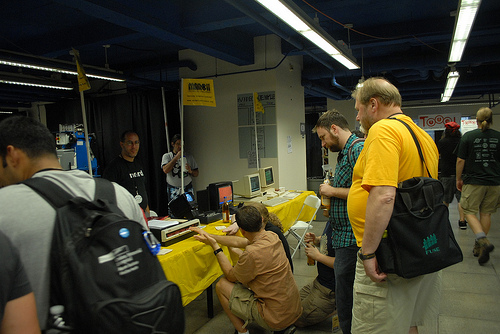 Our newSolar Modification Kits gained a lot of attention with the diy hackers. The Discover Electronic’s Kit and Papertronics were big hits, and we made some great connections for getting them into classrooms! One group of young-builders chose to DIY at the conference, and reported later how their Papertronics made great night-lights for their hotel room.

Sparkle Labs had a great experience at our first ever HOPE conference, and we can’t wait for the next Maker Faire in Detroit Rock City in August.